Every 15 minutes an elephant is poached, 365 days per year. If this is allowed to continue, the greatest landliving mammal on mother earth will be extinct within a generation or two.
For the past 28 months I have been writing blog posts (in Swedish) on subjects that are related to the Antiques and Arts trade. Frequently I discuss subjects that other sources for some reason or another ignore. One subject that lies close to my heart is elephant ivory. I have proven that several auction houses have been trying to sell ivory that has been worked on long after 1947, -the critical year in regards to the CITES Convention (the Convention on International Trade in Endangered Species of Wild Fauna and Flora). Ivory objects that are proven to stem from before 1947 are legal to buy or sell, and illegal if they are from after 1947. Proper paperwork is necessary to prove a correct provenance.

As an antique dealer specializing in Oriental Antiques, I frequently browse the internet and the other day I took interest in a Woolley & Wallis (W&W) Auction Catalogue in Salisbury, England. More specifically their latest Oriental sale, that took place on the 21-22 of May, 2014.

The number of items made of or including ivory amounted to 77, a staggering number considering that auction houses ought to be quite restrictive in admitting pieces made from elephant ivory. Be that as it may. That is a difficult discussion to pursue.

Since I first discussed the problem of auction houses trying to sell (potentially) new ivory, the attempts to sell ivory have dropped drastically in Sweden (see the blog post Six-finger-Jane-returns; Now even older and WITH a provenance! (please use the google translate-button for translation).


I nick-named an ivory figure "Six-finger-Jane" that was first(?) put up for sale in the autumn of 2013 in south Sweden (Helsingborgs Auktionsverk (HAV)) and did not meet its reserve. Before the sale, I pointed out that the pair of figurines were of exceedingly banal quality and produced in a way that implied a very late date. HAV offered it for sale in 2013 and had no (printed) provenance to offer and dated the two figurines as "early 20th Century" at 8000 SKr, roughly £719. As earlier stated and to no-one´s surprise they failed to sell. Atypical smiling faces, a general stiffness to the carving and an extra finger to the left hand of the woman were facts among others that drew me to the conclusion that these figurines were of a later year than 1947. Also, a curiously gigantic ring finger was noted. This pair of figurines is now offered by another Swedish auctionhouse, Skånes Auktionsverk. This time with a rather specific provenance and dated slightly earlier and with a slightly higher suggested price span.

Now, look at lot number 478, in Woolley & Wallis Asian Art II- 22 May 2014:
This smiling, semi-clad, rather chubby chap, so called Budai He Shang by W&W´s experts, (often also referred to as a laughing Buddha/Budai) is rather interesting. The estimate was £300-500 (3340-5568 SKr) but it sold for quite a bit more, namely £2.500 (27.843 SKr). Please compare Ms Six-finger with our laughing friend. I need not delve very deep into the general stiffness of all three of these figurines. They are all so poorly executed, that it is appalingly obvious that they could not possibly have been made in around the year 1900. Oh, maybe one more thing. While you are at it, throw a glance at Mr Happy Buddha´s right foot, please:
Here we have an item that has been catalogued by professional auctionhouse employees as circa 114 years old. An item that was carved from purportedly -at least- a 114 year old elephant´s tusk. The Chinese artisan who carved this tusk ought to have been a master with the carving tools, regarding how highly ivory was esteemed at the time.

I can hear the boss of the Ivory carving workshop shout: WHERE did you place the toe nails, you moron?! And on another day maybe the same boss was heard shouting to the very same employee: HOW many fingers did you do on that hand, you IDIOT!? I hereby suggest that these figurines were both made by the same copyist carver, please note the choice of wording, I did not write artist carver.

You may still think that it must be the real and genuine deal, since it "sold for so much money". Here´s the irony of it all; I am guessing that the buyers of pieces like this are men with very thick wallets, but possibly not so thick on the knowledge side of it all.

The Buddha-with-the-crazy-foot is probably bound for mainland China. The subject of Chinese buyers of Chinese fake items has been extensively discussed by Antikmonologen.
All the above might sound funny at first glance, but I assure you I am not laughing. There is so much money in ivory that many strong forces keeps the illegal trade going. Organizations such as Elephant Voices and World Wildlife Foundation (WWF) keep highlighting the precarious situation of the elephants. WWF have pointed out that there are links between organized crime and the ivory trade. The Swedish branch of WWF ran a campaign in 2013 and petitioned for the Swedish auction houses to bring a complete halt to the trade in ivory(-related artefacts). I am pretty certain that the auction houses of the world would protest strongly against that. Ivory was included in a plethora of items up until the plastic era, so it certainly might be difficult to implement.

On the other hand, if auction houses and front-line experts keep admitting and selling obviously modern ivory artefacts, our children will be without the majestic creatures that I so much love. One auction house in Sweden, Uppsala Auktionskammare, will be brought to court for violating the CITES Convention (Uppsala Auctions -PROBABLY- gives up responsability for Asian Antiques). How is it possible for a big auction house to sell pieces like the ones discussed in this blog, that could be spotted by anyone mildly talented and interested in works of art, as banal, recent work? Finding six fingers on one hand or toe nails on the underside of a foot from the late Qing period is like spotting a Volkswagen Beetle in a Rubens oil painting.

The marketplace Ebay announced in 2008 that ivory sales were banned with them. That is not at all the case. Click away for a minute or two on the web. Yet another sad story.

The fact that Chinese ceramics are extensively faked and offered all over the world as old, is a very sad story indeed. The problem is hardly new and we see auction houses, dealers and Fair traders who more or less knowingly keep up the work of selling hoax objects to the market. A market that on the whole is unaware of what is going on. But, the experts must know. And do they mention or question that? If you ask me, the answer is very often NO. As John Cleese put it in the comedy Fawlty Towers; Do NOT mention the war. I believe the market is rather cynical; Oh, some rich person from China just bought a pottery bowl for lots of money. Was it new, catalogued as old? -Heck Yeah! But he can probably afford that "loss" or negative investment.

A small auction room called Kolonn in Stockholm, Sweden, tried to sell the following vase today (28th of May):
Anyone with a rudimentary interest in Chinese blue and white porcelain, knows that a vase like the one illustrated did not exist during the 19th Century. It is a very poorly executed fake, some might call it copy, of a Yuan (1279-1368) vase. It is catalogued by supposedly professional people, in a professional environment that purports to take full responsibility for correct catalogue entries. I call it Antique-phishing. I see hundreds of examples of totally mis-catalogued mainly Chinese ceramics, every day, 52 weeks per year. Does anyone "important" speak up or protest? Not as far as I know. Do not mention the war. Mind your OWN business. The vase failed to sell.

There is one fundamental difference between all the Chinese fake ceramics and the overwhelmingly questionable Woolley & Wallis laughing Buddha (I prefer to refer to him as a crying Buddha). The difference being that for every elephant ivory piece that is sold, there will be another client looking for new items. Be that antique or new. In other words, the elephants will keep on being slaughtered for their tusks.

How often is an elephant poached?
Is it worth it, John Axford, Deputy Chairman of Woolley & Wallis, one of the familiar faces of the British Antiques Road Show and other auctioneers of the world? How big would the "loss" in income be for the auction houses of the world in total, if you started to really impose the rules of CITES?

...Grab that cash with both hands and make a stash
New car, caviar, four star daydream,
Think I'll buy me a football team
Money get back
I'm all right Jack keep your hands off my stack.
Money it's a hit
Don't give me that do goody good bullshit...
Pink Floyd, -parts of lyrics to the song titled "Money"

Footnotes:
I dedicate these lines to the fantastic person and great expert Gordon Lang, whom is no longer with us. Rest in peace Gordon, may you be surrounded by great pots, wherever you are.

The Qing period lasted between 1644-1912, the first Volkswagen Beetle was produced in 1938 and
the magnificent artist Peter Paul Rubens lived between 1577-1640. 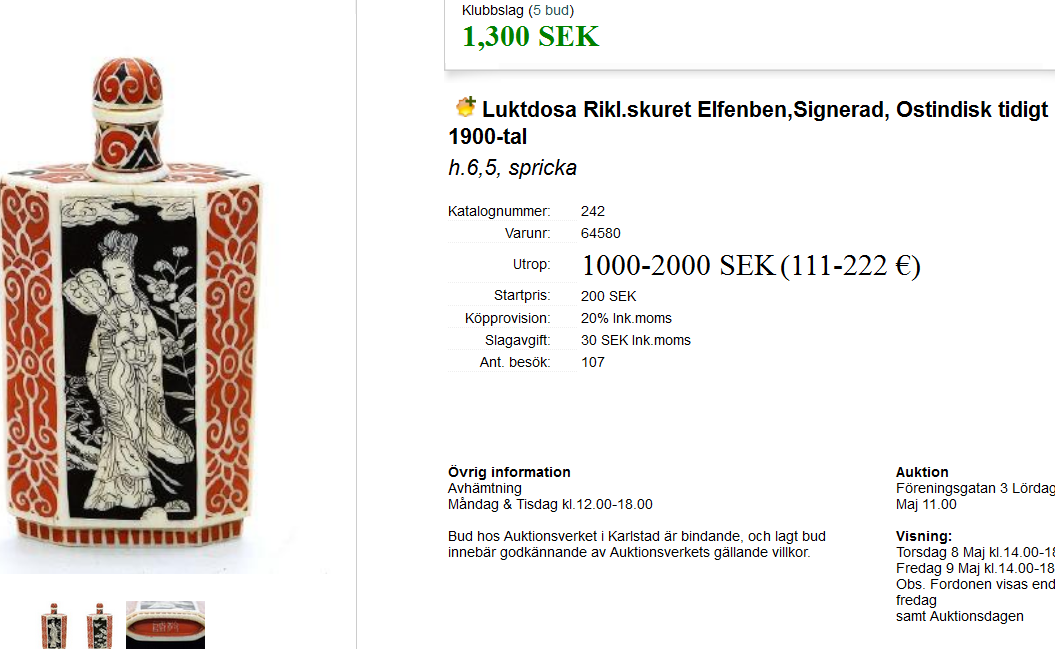