Four days ago, on the 1st of March, the Auction house Phillips, one of the world’s biggest, published a Ukrainian flag together with strong comments against the invasion by Russian troops in Ukraine, on their social media, Instagram. I was positively surprised, wrote a comment under the actual post and called it a strong stand (-which was questioned by several people). (Auction houses are considered as rather conservative and aren´t well known for burning bridges, for obvious reasons).

Yesterday, a post together with a depiction of the Red Cross, again on Phillips Instagram, was published. The Auctioneers presented that they were going to forward all the vendor’s commission/ buyer’s premium from the Sale of the 20th Century and Contemporary Art Sale, that took place in London, on Thursday the 3rd of March. 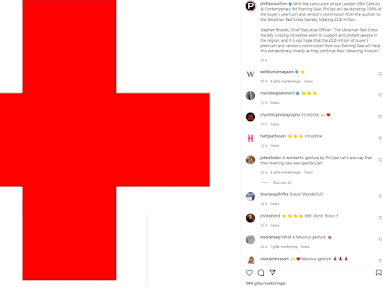 The outcome was published the same evening the sale took place. The Ukrainian Red Cross Society will receive £5.8 million. Roughly 75 million Swedish kronor ($7.7million). To my knowledge, a donation like this including all commissions, has never before been made by any auction house in the world. At least not on this level.
Even more sensational, the owner of Phillips is the Russian luxury retailer, Mercury Group. The two Leonids, Friedland/ Strunin, bought Phillips in 2008 from Simon de Pury, for an estimated $60 million. Yesterdays donation to Ukraine was in the vicinity of 10 percent of what the whole company was acquired for 14 years ago.
No lack of discussion subjects around the coffee machine at Mercury Groups Head Quarters today, I gather. -Nor in the Kremlin, I’m afraid.
Mr Putin, PLEASE get the f--k out of Ukraine NOW!